This blog post features an Anglo-Saxon trivia quiz that will test (and/or increase) your knowledge about magical medicine in early medieval England.

Whereas the bulk of early medieval English medicine consists of herbal and botanical remedies, some of the more fanciful ways to alleviate various ailments border on witchcraft. These remedies involve incantations, love potions, occult rituals and references to supernatural beings including dwarfs and elves. According to some early scholars, there was a fine line between magic and medicine and, as a result, much of early medieval English medicine should be regarded as little more than nonsense:

Surveying the mass of folly and credulity that makes up Anglo-Saxon leechdoms, it may be asked “Is there any rational element here? Is the material based on anything that we may describe as experience?” The answer must be “Very little”

Indeed, it is not hard to find examples of seemingly irrational, magical medicine in Anglo-Saxon sources, as the following trivia quiz will illustrate.

Have you got the folly and credulity to be an Anglo-Saxon doctor? 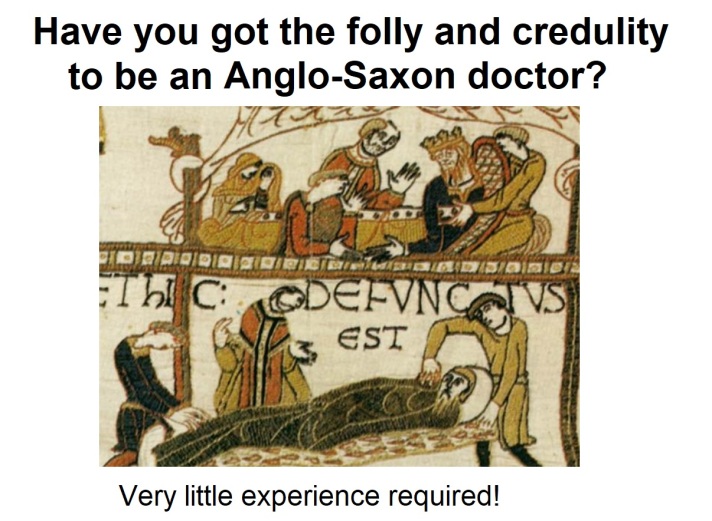 The following 10-question-quiz introduces some characteristics and intriguing examples of ‘magical medicine’ from Anglo-Saxon England.  Each multiple-choice question has at least one right answer and clicking this will reveal an explanation with further information. Good luck! N.B. Unfortunately the quiz does not work in all mobile browsers (such as the Twitter browser), if you see all the explanations expanded, better use another browser!

1. The best cure against a head ache is:
Lying on a dog’s head, burned to ashes.
Correct! A common principle in early medieval medicine is ‘sympathetic magic’: the cure often resembles the disease. In the case of a head ache, you use a dog’s head. No actual puppies were harmed during this remedy, however, since Old English hundes heafod ‘dog’s head’ was the name for the plant now known as the small snapdragon [Antirrhinum orontium]. Here is a drawing of the hundes heafod in the eleventh-century Old English Herbal: 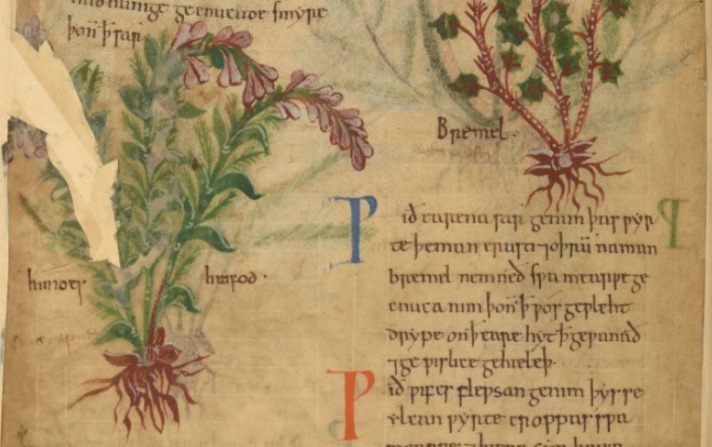 “Hundes Heafod” (Small snapdragon) in London, British Library, Cotton Vitellius C.iii, fol. 45v.
Drinking a hen’s egg, mixed in warm ale.
Singing nine Pater Nosters.
Leeches.
2. In an Anglo-Saxon aphrodisiac, you would likely use:
Oysters.
A carrot and two plums.
Leeches
Deer testicles.
Correct! The principle of sympathetic magic may be at work here as well. This ‘love potion’ is found in the Old English translation of Medicina de quadrupedibus:

Wif gemanan to aweccanne, nim heortes sceallan, dryg, wyrc to duste, do hys dæl on wines drinc. Þæt awecceþ wif gemanan lust. (London, British Library, Cotton Vitellius C.iii, fol. 76v.) [To arouse a woman for sexual intercourse, take the testicles of a deer, dry them, grind them to dust, do a part of this in a drink of wine. That will arouse a woman with the lust for intercourse.] Read more about Anglo-Saxon aphrodisiacs here: Anglo-Saxon aphrodisiacs: How to arouse someone from the early Middle Ages?
3. A hiccough is most likely caused by:
Accidentally swalllowing an elf.
Correct! The Old English word for hiccough was ælfsogoða ‘elf-sucking’, suggesting a hiccough was caused by sucking in an elf. Elves, dwarves and worms were often assumed to be the cause of diseases in Anglo-Saxon magico-medicine.
An imbalance of the humours.
Drinking too quickly.
Leeches.
4. Which is the best cure against warts?
A mixture of dog’s urine and mouse blood.
Correct! Waste products were often used in Anglo-Saxon medicine.

“Wiþ weartum. Genim hundes micgean 7 muse blod, meng to somne, smire mid þa weartan, hig witaþ sona aweg.” (British Library, Royal 12 D XVII, fol. 116r) [Against warts. Take the urine of a dog and mouse blood, mix together, rub the warts with it, they will immediately go away.]
Applying some leeches.
Cutting them off with a heated knife.
5. In case of severed sinews, I apply:
The bark of a young and healthy tree.
Earthworms.
Another case of sympathetic magic: Earthworms resemble sinews and, as an added bonus, they regenerate after being cut in half. What better to use for severed sinews?

Gif sinwe syn forcorfene nim renwyrmas, gecnuwa wel, lege on oþ þæt hi hale synd.” (British Library, Royal 12 D XVII, fol. 118r) [If the sinews are cut, take earthworms (lit. rain-worms), pound them wel, lay them on until they are whole.
Leeches.
6. Throwing a dungbeetle over your shoulder and saying “Remedium facio ad ventris dolorem” three times will:
Give you the power to cure stomach aches for a full year.
Correct! I discussed this ritual here: Creepy Crawlies in Early Medieval England: Anglo-Saxon Medicine and Minibeasts
Get rid off an annoying itch between your shoulder blades.
Get rid off the dungbeetle.
Technically correct, but try again!
Alleviate diarrhea in the entire village.
7. A child has a fever, you:
Put it on a rooftop in the sun.
Correct! This way of curing a child was considered rather sinful and is mentioned in various Anglo-Saxon penitentials, including this one:

“Gyf hwylc wif seteð hire bearn ofer rof oððe on ofen for hwilcere untrymðe hælo .vii. gear fæste” (Brussels, Bibliothéque royale, 8558-63, fol. 152v) [If any woman sets her child on a roof or in an oven for the cure of any illness, fast for seven years].
Put it in an oven.
Correct! This way of curing a child was considered rather sinful and is mentioned in various Anglo-Saxon penitentials, including this one:

“Him hylpð eac þæt him fæt cild æt slape 7 þæt he þæt gedo neah his wambe simle”(British Library, Royal 12 D XVII, fol. 83r) [It also helps him that a fat child should sleep by him, and that he should put it always near his (stomach).]
Against madness, hit the patient with a whip made of dolphin skin.
Nope. This one is real:

“nim mereswines fel, wyrc to swipan, swing mid þone man sona bið sel. Amen.” (British Library, Royal 12 D XVII, fol. 120r) [take the skin of a dolphin, make into a whip, hit the man with it. He is immediately healthy. Amen.] Note that the ‘Amen’ was added by a later hand!
Against misty eyes, rub the eyes with child’s urine and honey.
Nope. This one is real:

“Gif mist sie fore eagum nim cildes hlond 7 huniges tear meng tosomne begea emfela smire mid þa eagan innan” (British Library, Royal 12 D XVII, fol. 112r) [If a mist is before the eyes take a child’s urine and a drop of honey, mix them both together equally, smear it into the eyes].
None; They are all real.
Correct! Click on all individual answers to see the actual early medieval English remedies.
10. Your patient has a sore throat, you prescribe:
Drink heated honey with some herbs.
Correct! Not all Anglo-Saxon medicine is magical or silly!
Gurggle with the spittle of a horse.
No! Don’t be silly.
Take the neck of a goose and wrap it around the patient’s neck.
No! Don’t be silly.
Nine leeches.
No! Don’t be silly.
Put the patient in an oven.
No! Don’t be silly.

While the quiz above may suggest that Grattan and Singer were justified in rejecting Anglo-Saxon medicine as folly and credulity, more recent scholarship has suggested this harsh criticism is undeserved. Treatments with magical and irrational elements only make up about fifteen percent of all early medieval English remedies. The majority can be categorised as herbal medicine, an alternaive form of medicine still practised today. M. L. Cameron tested out some of the ingredients in Anglo-Saxon remedies and concluded:

Did ancient and medieval physicians use ingredients and methods which were likely to have had beneficial effects on the patients whose ailments they treated?… I think the answer is “Yes, and their prescriptions were about as good as anything prescribed before the mid-twentieth century”. (M. L. Cameron, Anglo-Saxon Medicine (Cambridge, 1993), p. 117)

In other words, Anglo-Saxon medicine may not have been as ineffectual as it might seem. In fact, a few years ago, an Anglo-Saxon remedy for eye stye shocked the world by being able to succeed where modern antibiotics had failed:

Perhaps, then, Anglo-Saxon medicine deserves more than a silly trivia quiz, but that’s something for future blog posts!

If you liked this blog post, you may also enjoy: 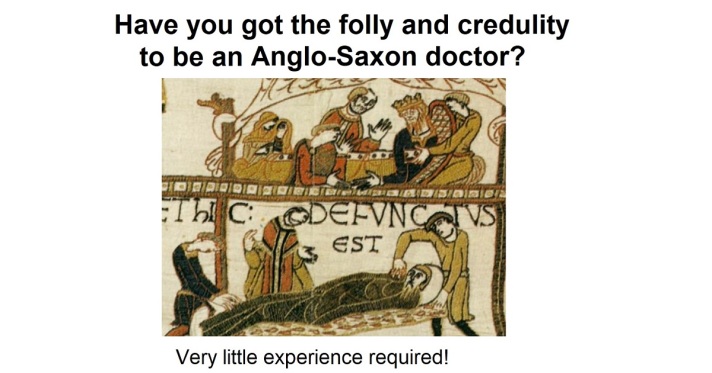 © Thijs Porck and Dutch Anglo-Saxonist Blog, 2018. Unauthorised use and/or duplication of this material without express and written permission from this site’s author and/or owner is strictly prohibited. Excerpts and links may be used, provided that full and clear credit is given to Thijs Porck and Dutch Anglo-Saxonist Blog with appropriate and specific direction to the original content.