Memes have become a popular form of communication and, when put into Old English, can be an effective teaching tool. I made the memes featured in this blog some five years ago, but they remain effective in a class room setting today.

#1 Keep calm and carry on 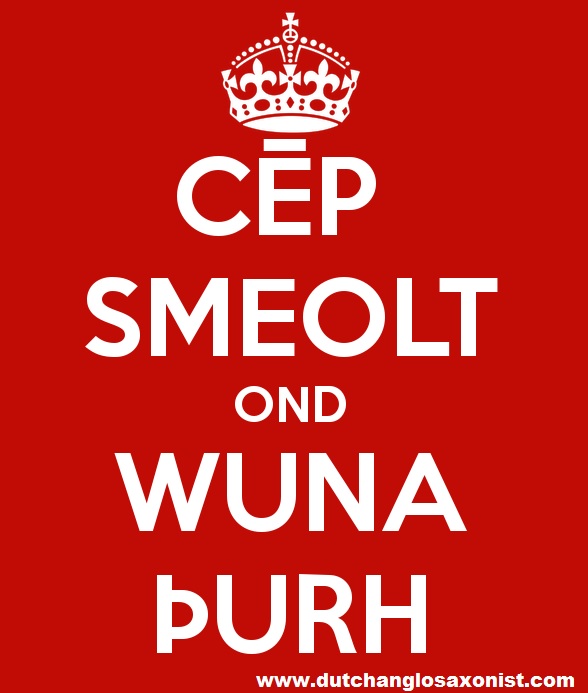 Perhaps the most widespread meme in the history of the Internet is the ‘Keep calm and carry on’-kind. Based on a motivational poster issued by the British government for boosting the moral in preparation of the second world war, this poster has sparked various spoofs. The Old English motivational quote may have profited some Anglo-Saxons during the time of the Viking raids.

Beowulf’s decision to fight the monster Grendel without weapons may well be described as the ‘YOLO-moment’ of Anglo-Saxon literature. 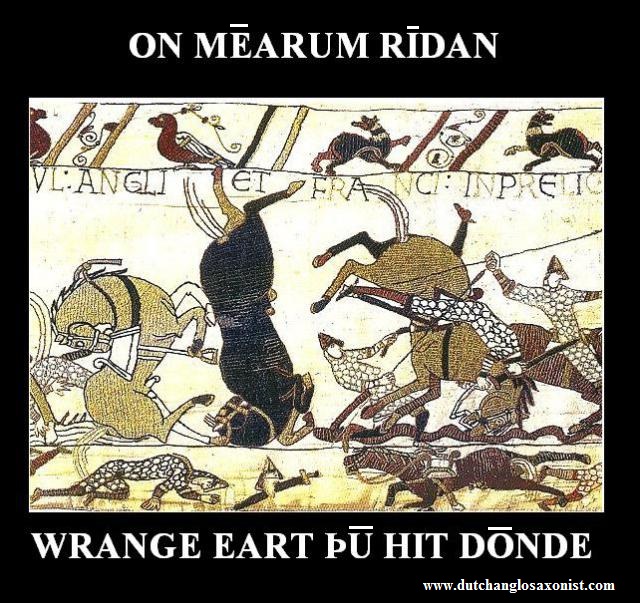 The phrase ‘You’re doing it wrong’ typically accompanies an image of someone ‘failing’ at doing something correctly. What better phrase to accompany this scene from the Bayeux Tapestry than ‘Riding on horses; you are doing it wrong’?

#4 When you see it, you will shit bricks

The phrase ‘When you see it, you will shit bricks’ is associated with images that, upon expectation, feature a surprising element. This certainly came to mind, when I spotted the Sutton Hoo helmet in King Arthur’s bed room in the BBC series Merlin (for which, see: Anglo-Saxon props: Three TV series and films that use early medieval objects).

#5 Shut up and take my money

This phrase is used in combination with a picture of something that is so desirable that people just really want to have it. Surely, the Old English variant must have been uttered whenever an Anglo-Saxon looked upon the dazzling Lindisfarne Gospels!

#6 I don’t want to live on this planet anymore 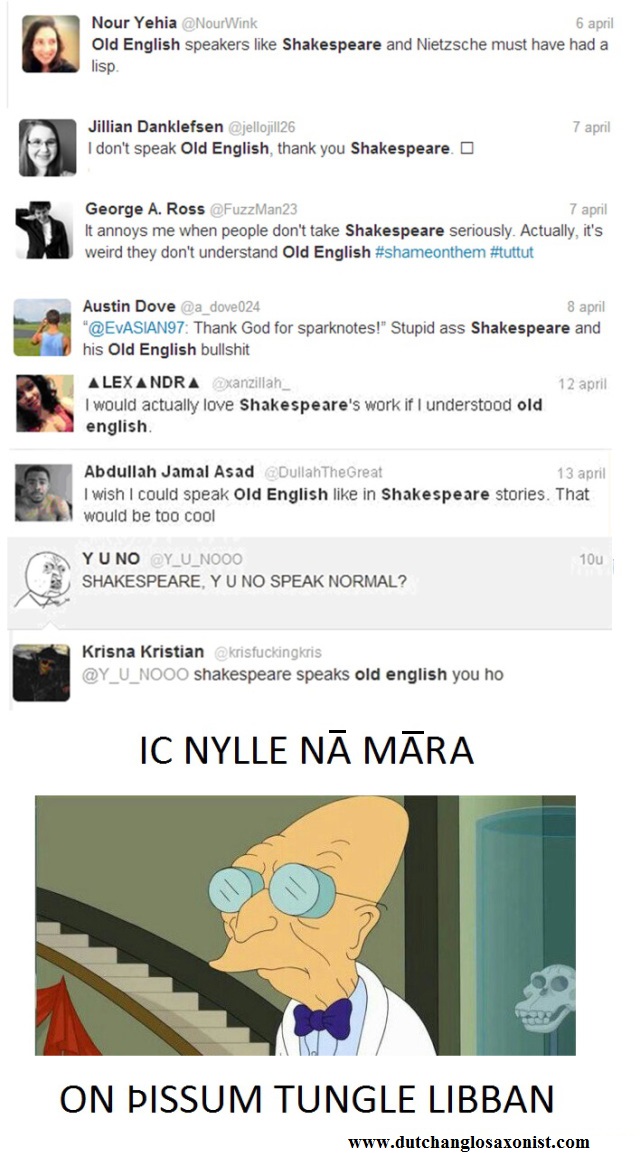 Out of disappointment with the stupidity of others, one can express the desire to no longer live on this planet. This sentiment certainly comes to mind when faced with the idiotic notion that Shakespeare spoke Old English (for which, see: What if Shakespeare HAD written Old English?)

#7 Ain’t nobody got time for that

What better way to introduce the Old English magic sheet (an overview of Old English declension made by Peter Baker – link) than by pointing out that it will save your students some time? “Learning Old English Declensions? Ain’t nobody got time for that!” 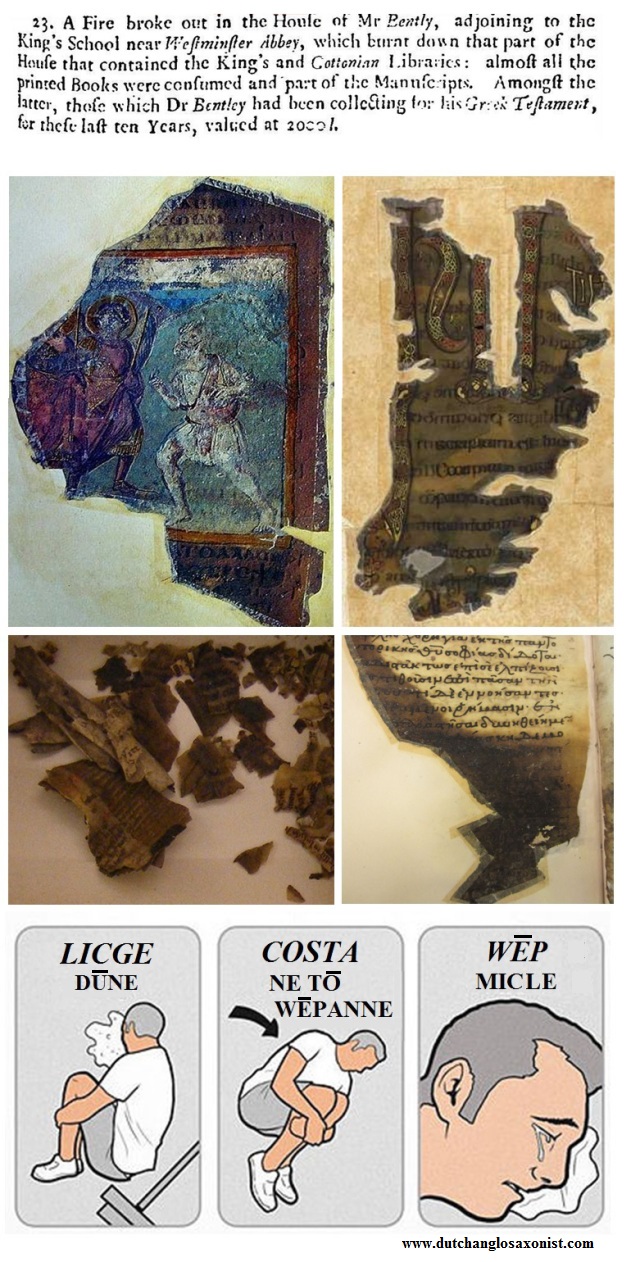 This meme provides instructions on how to act in situations of great sadness. Surely, no meme is better to suited to refer to the Ashburnham House Fire of 23 october 1731, which damaged many Anglo-Saxon manuscripts that belonged to the Cotton collection. For more damaged manuscripts, see: http://britishlibrary.typepad.co.uk/digitisedmanuscripts/2013/02/crisp-as-a-poppadom.html 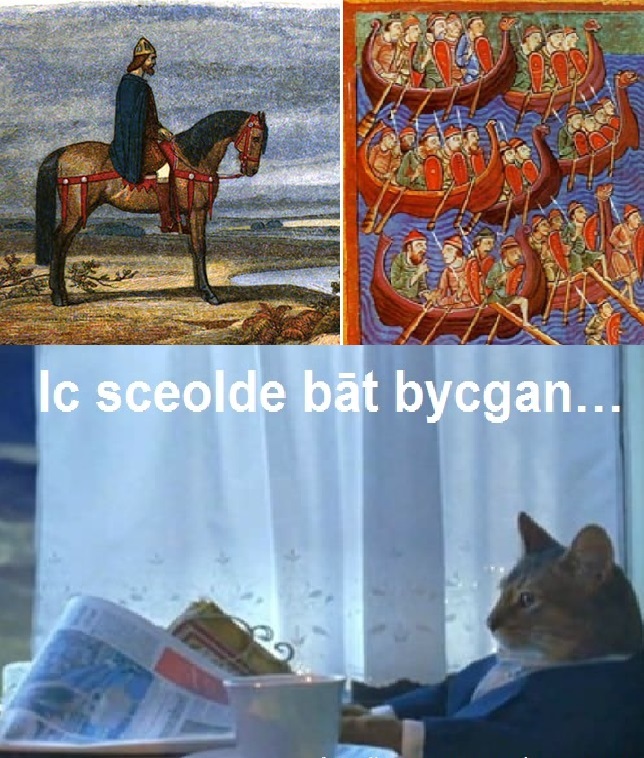 A picture of a cat reading a newspaper has become associated with the phrase ‘I should buy a boat’. This phrase certainly seems to have gone through Alfred the Great’s mind when he saw the Vikings (according to legend, Alfred founded the English navy). 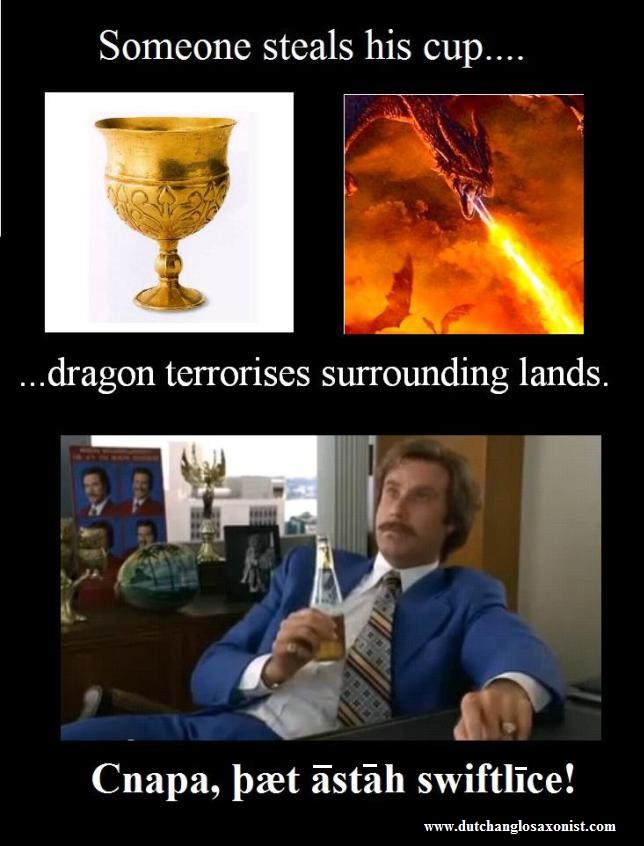 This meme phrase is used when something quickly gets out of hand. Rather suitable for the main plot of the last part of Beowulf (and Tolkien’s The Hobbit; for the former, see: Beowulf vs the Dragon: A Student Doodle Edition).

This meme comments on the slightly disappointing number of books on Old English Literature in the open stacks of the English reading room of Leiden University Library.  Ah well, it is something. 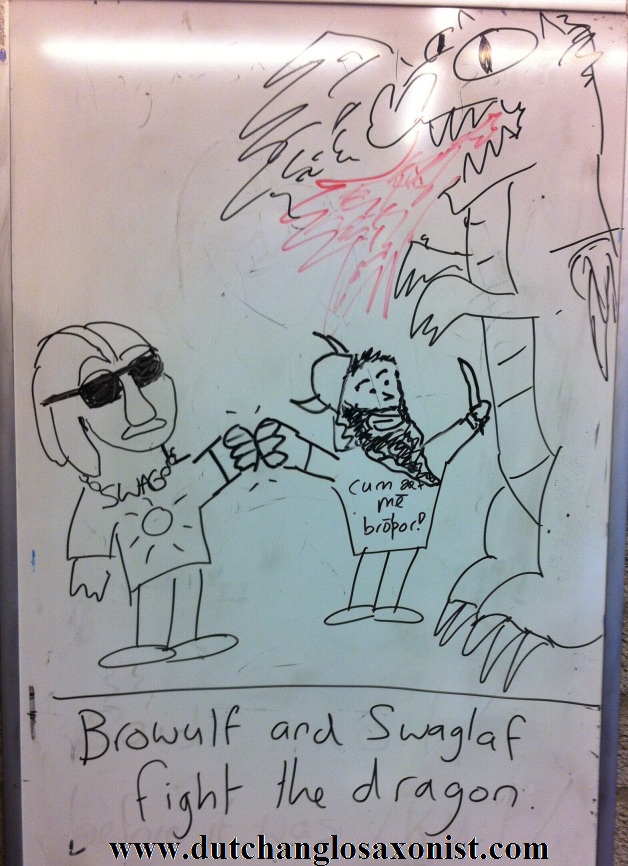 ‘Come at me, bro!’ was obviously what Wiglaf and Beowulf said against the dragon; well…if they had been called Swaglaf and Browulf, that is.

This meme requires some explanation. A couple of years ago, I attended the Manchester Centre for Anglo-Saxon Studies Easter Conference and one of the speakers, Duncan Sayer of the University of Central Lancashire, spoke about the infamous ‘cow burial’: an Anglo-Saxon woman, found buried alongside a cow (news item). Sayer suggested that the cow, which had been skinned before being laid in the grave, was meant as a ‘feast for the dead’. A good opportunity to make a spoof of the ‘heavy breathing cat-meme’, which is used in combination with extravagant food.

#15 Anglo-Saxon hipster, before it was cool 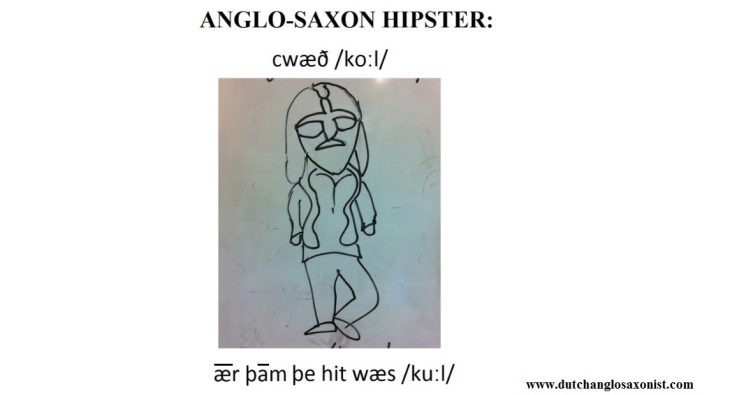 Hipsters tend to like things before it was cool. The Anglo-Saxon hipster, of course, would have pronounced the word differently: cole (k-Oh-l), rather than cool (c-Oo-l).

I imagine the Old English version of this meme may prove very handy for those encountering Old English for the first time.

This meme accurately represents Queen Wealhtheow’s response to King Hrothgar’s plan to adopt Beowulf as a son (and thus threatening the succession by her own sons).

An Anglo-Saxonist’s response to this popular video format.

#19: The History of English, the Meme

A historical linguistic variant of this meme.

Some of these memes were once posted on http://oememes.wordpress.com. To date, that website has catered to seven thousand unique viewers. All memes there have now been moved to this blog post; some new ones have been added.

By thijsporck in Old English on May 22, 2017.
← Anglo-Saxon Cryptography: Secret Writing in Early Medieval England An Anglo-Saxon Anecdote: Eilmer, the flying monk, and the dangers of classical literature →