Kings, queens, warriors and monks often take centre stage in writings about Anglo-Saxon England; by contrast, this post calls attention to the beings that generally shunned the limelight: worms, earwigs, scorpions, spiders and dungbeetles. As it turns out, these minibeasts played an important role in early medieval medicine.

Lice for the learned: Crawling among the glosses

While Anglo-Saxon England must have been crawling with all sorts of little critters, ‘minibeasts’ (a general term denoting insects, spiders, scorpions and such) only rarely receive mention in Old English texts. In fact, most Old English words for various bugs only survive because they were listed as glosses (translations) of Latin words. The so-called ‘Leiden Glossary’ (c. 800), for instance, features the Old English words “hnitu” (‘nit’ for Latin lendina); “ęruigga” (‘earwig’ for Latin auricula) and “snægl” (‘snail’ for Latin maruca):

Other minibeasts whose names only survive as glosses include:

Some of these buggy Old English glosses are wonderfully descriptive, such as flǣsc-maþu ‘maggot, lit. flesh-worm’ and niht-butorflēoge ‘moth, lit. night-butterfly’. 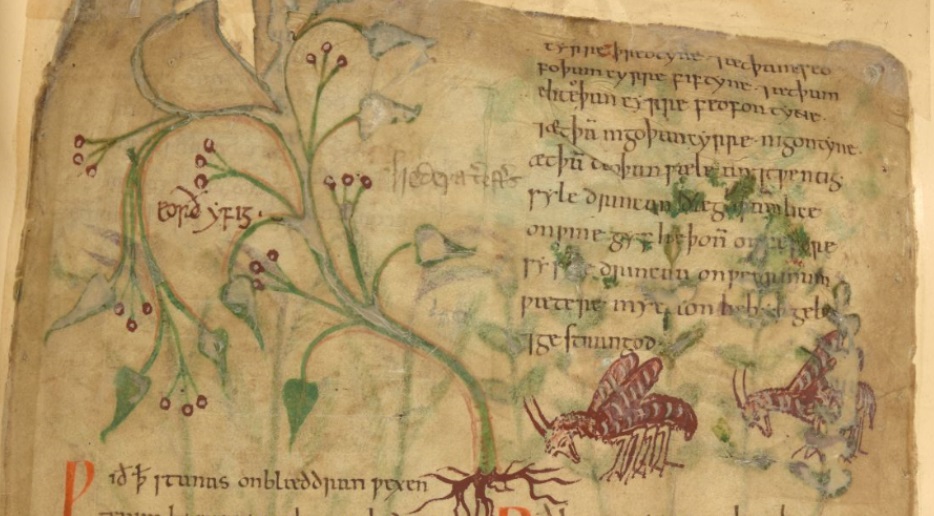 Other than glossaries, Anglo-Saxon medical texts are the best place to find creepy crawlies. Anglo-Saxon medical practicioners were well aware of the dangers posed by parasites for the well-being of their patients. As such, Anglo-Saxon medicine features various recipes to purge the body of bugs. Bald’s Leechbook (compiled in the ninth century) provides ample examples of such remedies against invading worms and earwigs:

[For worms in eyes, take seed of henbane, shed it onto glowing embers, add two saucers full of water, set them on two sides of the man, and let him sit there over them, jerk the head hither and thither over the fire and the saucers also, then worms shed themselves into the water.

Against earwigs, take the big great windlestraw with two edges, which grows on highways, chew it into the ear; he (the insect) will soon be off.] (ed. and trans. Cockayne 1864, 38-39; 44-45 – I have slightly modernized the translation)

As these two remedies demonstrate, Anglo-Saxon medical practice could involve a mixture of bodily maneuvers (some practical, other less so) and the application of herbs.

A snake and a scorpion in the entry for common plantain in the Old English Herbarium. London, British Library, Cotton Vitellius C. iii, fol. 21v

The beautiful Old English Herbarium (an eleventh-century Old English translation of a fifth-century Latin text) is a testimony to the importance of herbs in Anglo-Saxon medicine. The Herbarium gives illustrations for each herb, followed by various remedies that can be made with them. The common plantain (or: waybread), for instance, was said to help against the bites of scorpions, as well as intestinal worms:

[Against the bite of a scorpion, take the roots of the plantain, bind them onto the man. Then it is believed that it will come to good use for him.

If intestinal worms harm a man, take the juice of the waybread, pound and wring, give it to him to drink and take the same plant, pound it to dust, put it on the navel (or: anus) and fasten it tightly thereto.]

The Old English Herbarium has various recipes against the bites of scorpions, despite the fact that, for as far as I know, these critters were not native to Anglo-Saxon England.

Another biting bug to be featured in the Old English Herbarium is the spider, whose bites may be alleviated with the help of the herbs vervain, ivy and stonecrop. Yet another medical text, known as Leechbook III, features a more obscure remedy for a spider bite:

[Against the bite of a spider, take a hen’s egg, mix it raw in ale with a fresh sheep’s turd, so that he does not know, give him a good cup full to drink.]

This cure seems hardly effective! Although it would, I suppose, prevent people from ever complaining about spider bites again. This cure also demonstrate another aspect of Anglo-Saxon medicine: some of its remedies make absolutely no sense or even come across as magical. (also worthy of note: the Old English word gongewifran literally means ‘a weaver as it goes, a walking weaver’!) 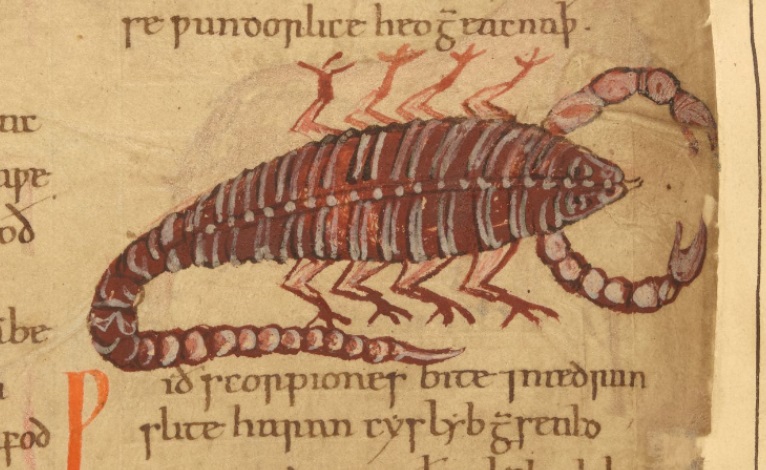 Medicinal minibeast magic: Creepy crawlies as part of the cure

The ‘magical’ side of Anglo-Saxon medicine truly comes to the fore in those remedies that feature insects not as causes of diseases, but as parts of the cure. Some of these cures rely on what might be termed ‘sympathetic magic’, a type of magic based on imitation or correspondence – i.e. the cure often resembles the ailment. Leechbook III seems to be appealing to this kind of magic when it proposes to use earthworms and ants in the case of severed or shrunken sinews:

[If the sinews are cut, take earthworms (lit. rain-worms), pound them wel, lay them on until they are whole. If the sinews are shrunk, take ants and their nest, boil in water and bath therwith the sinews and expose them earnestly to the smoke]

The rationale behind these cures is simple: since earthworms can regenerate after having been cut, they must surely be able to help severed sinews; the best thing to use against small sinews is small insects like ants.

Leechbook III also features another peculiar cure, which involves a dung beetle. The occult procedure outlined below promises to give the practitioner the ability to cure stomach aches for a whole year:

[Where you see a dungbeetle throw up on the earth, grab it with two hands along with its dung-ball. Wave greatly with your hands and say three times: Remedium facio ad ventris dolorem (I make a a cure for the pain in the stomach). Throw then the beetle over your shoulder onto the way. See to it that you do not look back. In case of a person’s stomach or abdomen pain, grab with your hands the stomach. It will soon be whole for them. You are able to do this for twelve months after the beetle.]

I wonder how many Anglo-Saxon dungbeetles fell prey to aspiring doctors in search of ways to alleviate rumbling tummies.

The Anglo-Saxon remedies described above would certainly be classified as ‘alternative’ by modern standards and it is to be hoped that today’s medical professionals have found more effective ways to remedy diseases caused by worms, earwigs, spiders, scorpions and other parasites.

If you liked this blog post, you may also enjoy: