For a bonus question on one of my Old English literature exams, my students used their artistic talents to draw their own rendition of Grendel’s mother from the Old English poem Beowulf. Together, these doodles give a neat overview of how Beowulf criticism has approached this feminine ‘monster’ and what my students have remembered of the poem.

i) Grendel’s mother: An enigmatic being

Of the three main foes of Beowulf in the poem, Grendel’s mother is perhaps the most enigmatic. Scholars have long since debated what to make of this “brimwylf” [sea-she-wolf] Beowulf, ll. 1508, 1601), living in an underwater-hall. She is presented as monstrously violent, but her actions are motivated by a completely understandable (and human?) desire to avenge the death of her son. Is she a monster or a human?These drawings by my students clearly demonstrate this complex ambiguity, ranging as they do from catlike, beastly mothers to fair-haired dinosaurs, through to a green-scaled woman in a dress:

ii) Grendel’s mother enters the scene: A woman on a mission

Grendel’s mother makes her appearance halfway through the Old English poem. The poet has just recounted how Beowulf has defeated the monster Grendel by ripping off its arm. This arm is hung underneath the roof of the great hall Heorot as a sign of Beowulf’s victory and there is much rejoicing. King Hrothgar gives a lavish feast and, that night, the Danes fall asleep, confident that the monster Grendel no longer poses a threat. Enter Grendel’s mother, hell-bent on revenge:

She trashes the Danish slumber party in Heorot, grabs hold of Æschere, King Hrothgar’s “best friend”, and then returns to her underwater hall.

According to some critics (and students), there is a particular ‘poetic justice’ about the fact that Grendel’s mother takes Hrothgar’s ‘right-hand man’ in retribution for Grendel’s ripped-off arm:

iii) A mother in her mere

The next morning, Hrothgar wakes up to the news that his friend Æschere has been killed and, spurred into action by Beowulf, he leads a troop to Grendel’s mere. Grendel’s mother, we are told, had ruled this place for fifty years.

This eery pond is inhabited by strange monstrous creatures and none but Beowulf himself dares enter it. He swims down to Grendel’s mother’s underwater lair and soon finds out that his sword Hrunting is useless. Luckily, Beowulf finds a giant sword and manages to kill his female foe. Beowulf next finds the body of Grendel and decapitates it, turning the mere red with blood. The Danes see the blood and think Beowulf has lost, but the “faithful Geats remain in the neighbourhood waiting for Beowulf to emerge”:

As noted above, Grendel’s mother is often interpreted as a monster. How else could she live in an underwater lair and pose a threat to the strong hero Beowulf? Surely, she must have had sharp teeth, claws, webbed hands, flipper feet, “light eyes to see under water” and “biceps because she’s strong”:

Another student imagines a monster of another kind, one with a beard [the reference to the ‘Wonders of the East’ is to another text in the Beowulf manuscript, see The Marvels of the East: An early medieval Pokédex]:

Yet another student thought Grendel’s mother may have hailed from Eastern Europe and was distressed because it could no longer feed its son a bowl of borscht: 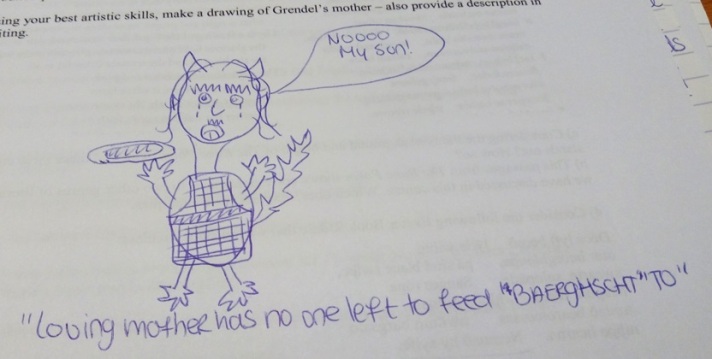 Some critics (and students) downplay the idea of Grendel’s mother as a monster. Their main argument revolves around the interpretation of the phrase “ides, aglæcwif” Beowulf, l. 1259a), used for Grendel’s mother. This phrase has been rendered rather negatively in some Beowulf translations, ranging from “wretch, or monster of a woman” (Klæber), to “monstrous hell bride” (Heaney), “monster-woman” (Chickering) and even “ugly troll lady” (Trask). These rather monstrous descriptions of Grendel’s mother are problematic: the word “ides” means ‘lady’ and is used in the poem to refer to queens, including Wealhtheow (wife of Hrothgar, king of the Danes); the first part of “aglæcwif” is indeed used of the monster Grendel and the dragon (both called “aglæca”), but it is also used of Beowulf and another human hero, Sigemund. Since there is no indication for calling Beowulf ‘ugly troll’, ‘monstrous’ or ‘monster’, it seems strange to give the word a negative meaning when it refers to Grendel’s mother. Hence, the word “aglæc” may be best rendered as ‘opponent, adversary’. The following student certainly remembered that bit:

The next student, too, sees Grendel’s mother as “not a monster, just a sad woman”:

Æschere’s bloody head on a pole is a nice touch. In an article I recently co-authored, we argue that Æschere’s head was indeed used as a boundary marker (see: Thijs Porck & Sander Stolk, ‘Marking Boundaries in Beowulf: Æschere’s Head, Grendel’s Arm and the Dragon’s Corpse’).

vi) The Jolie-i-fication of Grendel’s mother

Beowulf has been brought to the big screen many times and these cinematic adaptations have certainly influenced how we visualise the monsters of this poem (I wrote about this here: Spoiling the Mystery: Grendel in Beowulf Movies). One of the most memorable depictions of Grendel’s mother was the 3D animation of Angelina Jolie in the 2007 film Beowulf. The Jolie-i-fication of Grendel’s mother is captured beautifully by this student’s drawing: 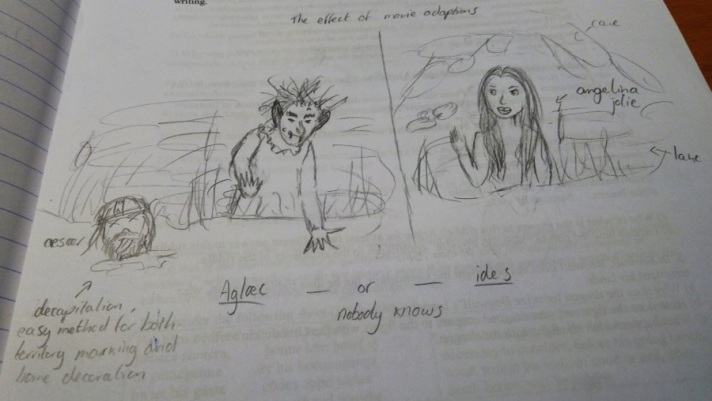 vii) The Pietà of Grendelangelo

The last student drawing is something special. It is not an exam doodle, but a ‘commissioned piece of art’. I asked Jolene Witkam, a student who wrote an excellent BA thesis about Grendel’s mother’s human nature ánd a skilled artist, to draw Grendel’s mother and Grendel in the poses of Mary and Christ of Michelangelo’s famous Pietà statue. The endresult, you will agree, is absolutely stunning:

If you liked this blog post, you may also enjoy other student doodle editions: