An Anglo-Saxon Anecdote: A singing ox, some dead pigeons and Saint Edith of Wilton

Alfred and the cakes, Cnut and the waves, and Eadmer the flying monk: Anglo-Saxon history is full of anecdotes. On this blog I will regularly highlight some amusing and/or remarkable episodes from early medieval England, along with a selfmade cartoon. This blog discusses how a singing ox and some dead pigeons heralded the death of St. Edith of Wilton.

Edith (961- 984) was daughter to King Edgar the Peacable (d. 975) and sister to Edward the Martyr (979). At a young age, she entered the nunnery at Wilton, where her mother (St. Wulfthryth) was an abbess. While she only lived to the age of 23, Edith seems to have made an impression on the community at Wilton. When, some hundred years later, the monk Goscelin of St Bertin travelled around England to write saint’s lives, he found that Edith was remembered as the patron saint of Wilton Abbey. Goscelin then wrote a biography of Edith, basing himself on “those things which they [the nuns of Wilton] heard from the venerable senior nuns, who both saw the holy virgin herself and devotedly obeyed her [Edith]” (trans. Wright & Loncar, p. 24).

Goscelin’s narrative includes various miracles, including Edith’s prophetic dreams. When her brother Edward was crowned King of England, for instance, “Edith, in contemplation, dreamed that her right eye fell out”. She interpreted this dream as follows: “It seems to me that this vision foretells some disaster to my brother Edward” (trans. Wright & Loncar, pp. 50-51). Four years later, Edith was proven correct: Edward was murdered at Corfe Castle (possibly due to the treachery of his stepmother Ælfthryth).

A singing ox and some dead pigeons

Goscelin reported another of Edith’s visions, which took place seven days before her own death. In a dream, she had a most disturbing vision: she dreamt that she was in a bathtub, surrounded by an ox who repeatedly sang John 3:8:

An ox went around the cauldron in which her bath used to be heated, and sang three times: “The Spirit breathes where he will, and you hear his voice, but you do not know whence he comes and whither he goes.” (trans. Wright & Loncar, p. 56).

As soon as she awoke, she contracted a fever. Next, she saw her pet pigeons lying dead near her bedside:

The doves, which she had fed as living beings like her in their purity and innocence, and had cherished with the regard of the Creator of all things, were suddenly found dead when their mistress fell into her fever, foretelling the sleep of their mistress, so that they seemed to anticipate her funeral rites. (trans. Wright & Loncar, p. 57).

When Edith died seven days later, she was carried out of her room in the cauldron that she usually took her bath in. As such, the singing ox walking around this ‘bathtub’ makes some sense, after all! 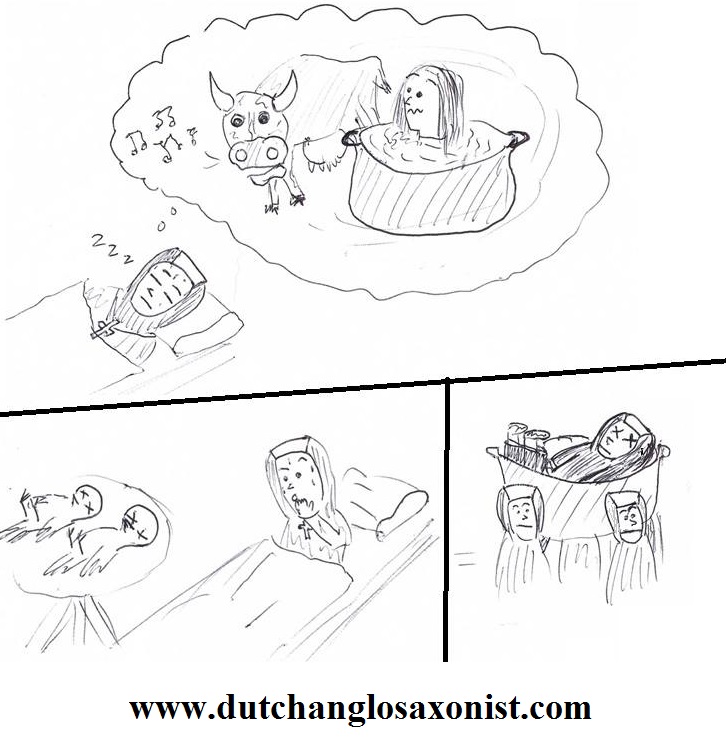 If you liked this post, you may also enjoy:

Stay tuned (and follow this blog) for more illustrated Anglo-Saxon anecdotes in the future!

Like Loading...
By thijsporck in Anglo-Saxon anecdotes, Animals, Saints on March 20, 2017.
← A pug’s guide to medieval Holland Richard Morris: The Man Who Popularized Early English →