This blog post focuses on one of the most extensively illustrated books from the Middle Ages: The Illustrated Old English Hexateuch (The British Library, Cotton Claudius B.IV). A unique picture book from early medieval England.

The Illustrated Old English Hexateuch as a picture book

Thirty-three goats, twenty-six sheep, thirty-one camels,  thirty cows and twenty-nine asses. The artist responsible for the illustrations of The Illustrated Old English Hexateuch made a valiant attempt to match the numbers of livestock mentioned in Genesis 32:13-14 as having been gifted by Esau to Jacob (“Two hundred she-goats, twenty he-goats, two hundred ewes, and twenty rams, thirty milch camels with their colts, forty kine, and twenty bulls, twenty she-asses, and ten of their foals”).  His efforts exemplify the great ambition behind this unique manuscript: to fully illustrate an Old English translation of the fist six books of the Bible. These efforts resulted in one of the most important examples of Anglo-Saxon art, with over four hundred illustrations.

The illustrations accompany the texts of Genesis through to Joshua, translated into Old English from the Latin Vulgate. This translation has been partially attributed to the famous homilist Ælfric of Eynsham, who was responsible for the translation of Genesis up to 24:22, the second half of Numbers and the book of Joshua. The rest of the translation was made by one or more anonymous translators. The text survives in seven other manuscripts , but Cotton Clauius B. IV is the only one to be illustrated (Barnhouse and Withers 2000: 2-3).  Most of its illustrations are original and were made especially to conform to the text of the manuscript: “In other words, the artist was not copying the pictures of a remote and long-forgotten age; like other creative artists he was thinking in terms of his own life and times” (Dodwell and Clemoes 1974: 71). As such, The Illustrated Old English Hexateuch is a unique, Anglo-Saxon picture book, that not only illustrates the text of the Old Testament, but also provides a glimpse of how an inhabitant of early medieval England imagined these events.

Sample: Sodom and Gomorrah and the seduction of Lot

To give you an idea of the joy of reading  The Illustrated Old English Hexateuch, here follows the story of Sodom and Gomorrah and the seduction of Lot (Gen. 19:24-33).  The text was edited by Samuel J. Crawford in 1922:

[God sent to the towns an all-consuming shower, mixed with sulfur, and destroyed the shameless ones. Thus, God then destroyed the towns with rage, and all the land he cast down likewise, and he burned all the citizens together, and all that was growing, was destroyed.]

In the illustration below, note the rather anachronistic architecture! 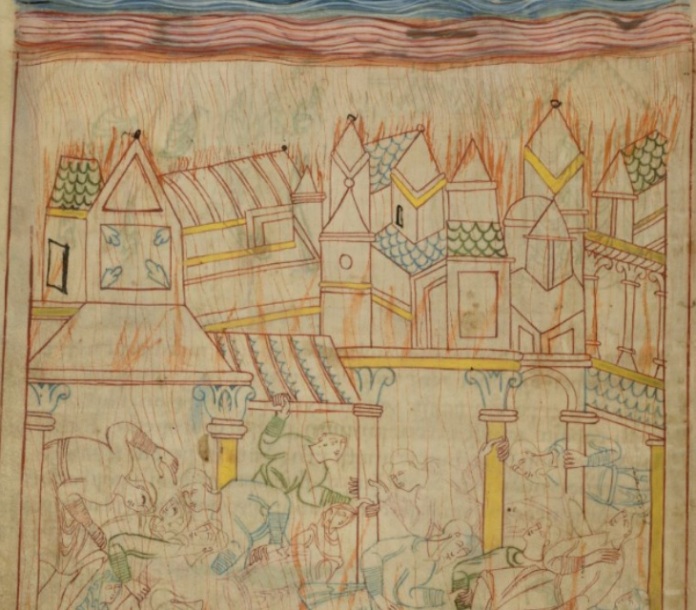 Sodom and Gomorrah are destroyed by rains of fire and brimstone (Gen. 19:24) © The British Library, Cotton Claudius B IV, 32v

[Then Lot’s wife unwisely looked back and was immediately turned into a salt-stone, not because of sorcery, but as a certain sign.]

In the added illustration, one of Lot’s daughters seems to be making a facepalm!

Lot’s wife is turned into a pillar of salt © The British Library, Cotton Claudius B IV, 33r

Lot and his daughters then find their way to a mountain, were the daughters plan to make him drunk:

[Then the elder daughter said to her younger sister: ‘Our father is an old man and no other man is left in the whole world, who might have us. Let us quickly make our father drunk with wine and let us lie with him, so that there may be an heir of his kin.’ Then they did so and made their father drunk.]

The image below suggests that the artist deemed four drinks enough to get Lot drunk enough to sleep with his daughters – on the right we can see a happy Lot sharing a blanket with one of his daughters (with untangled hair!))

How to illustrate a medieval manuscript? A five step guide

One very interesting feature of the Old English Illustrated Hexateuch is that some of its scenes were left unfinished, allowing us to reconstruct the various stages of the illustration process. Johnson (2000: 175-176) has identified the following five stages:

These five stages are illustrated below:

The above has hopefully convinced you that the Old English Hexateuch deserves to be more widely used and enjoyed. To ensure this and to give myself something to tweet about, I will start tweeting one image of the Old English Hexateuch a day, along with an accompanying Old English citation from the edition of the text by Crawford (1922). If you would like your daily fix of Anglo-Saxon manuscript illumination and Old English prose, follow me on Twitter.

God said: Let there now be a firmament between the waters. pic.twitter.com/bMXUEHx9Li

Like Loading...
By thijsporck in Art, Manuscripts, Old English Hexateuch on April 22, 2016.
← Benjamin Thorpe: The Man Who Translated Almost All Old English Texts Lǣce Hwā: Doctor Who in Anglo-Saxon England →