An Anglo-Saxon Anecdote: How Hengest was led by the nose

Alfred and the cakes, Cnut and the waves, and Eadmer the flying monk: Anglo-Saxon history is full of anecdotes. On this blog I will regularly highlight some amusing and/or remarkable episodes from early medieval England, along with a self-made cartoon. This blog discusses  on how Eldol of Gloucester led Hengest by the nose…

Escaping the Night of the Long Knives with a stick

In my previous blog on an Anglo-Saxon anecdote, I discussed the story of the original Night of the Long Knives, when the fifth-century Anglo-Saxon leader Hengest ordered his Saxon followers to kill their British neighbours (You can read up on this here). Not all the Britons were killed that night, however, as  the ever-reliable Geoffrey of Monmouth (c. 1100-1155) tells us in his Historia Regum Brittanniae [The History of the British Kings]. Geoffrey  reports how one Briton escaped (using a stick) and made sure that Hengest would get his comeuppance. This is the story of Eldol of Gloucester.

Eldol escaped the treacherous Anglo-Saxon onslaught by grabbing a wooden stick and “[i]f anyone approached him, he struck him so hard that his limbs would break and he would be dispatched straight to Hell. Eldol smashed heads and arms and shoulders and legs, inspiring the Saxons with great terror.” (Geoffrey of Monmouth, Historia, bk. VI, ch. 16). Before he managed to escape, Eldol had killed seventy men with his stick.

Leading Hengest by the nose

At a later date, Hengest and his Saxon troops ambush a British army, led by Aurelius Ambrosius (the uncle of King Arthur). Among the Britons, we find Eldol and he and Hengest come to blows:

O how these men were mighty in battle above all others! As they deal stroke after stroke to each other, sparks flew up from their blades like thunder and lightning. For a long while it was unclear which of the two possessed the greater strength: first Eldol would press forward and Hengest would fall back, then Eldol would lose ground while Hengest prevailed. (Geoffrey of Monmouth, Historia, bk. VIII, ch. 6)

Then, Eldol decides to play dirty:

“He seized Hengest by the noseguard of his helmet and, exerting all his strength, dragged him back behind the British lines. With the greatest joy, Eldol then cried aloud: ‘God has granted my wish! Press on, soldiers, press on! […] Victory is now within your grasp! With Hengest defeated, you have won!’” (Geoffrey of Monmouth, Historia, bk. VIII, ch. 6) 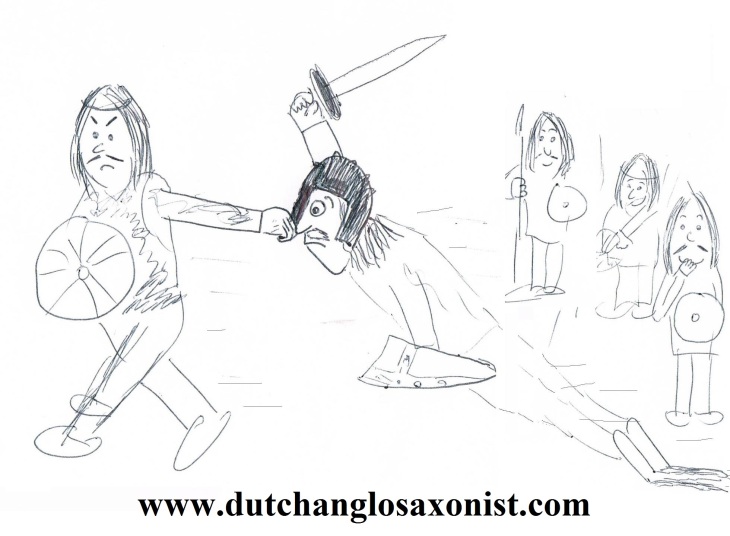 Eldol eventually cuts off Hengest head and rejoices some more.

The English idiom “to lead someone by the nose” means ‘to force someone to go somewhere’. People will tell you this phrase goes back to “the fact that a cow is sometimes led by rope attached to a ring in its nose”. You now know better…

If you liked this post, you may also like An Anglo-Saxon Anecdote: The Real Night of the Long Knives

Like Loading...
By thijsporck in Anglo-Saxon anecdotes on December 31, 2015.
← The Medieval in Middle-Earth: Rings of Power Anglo-Saxon aphrodisiacs: How to arouse someone from the early Middle Ages? →